Amazon’s AGM takes place this Wednesday (25th May), and a tax transparency resolution has been tabled by progressive investors, including Fair Tax Mark accredited PIRC, that requests Amazon publish a breakdown of the income, profit and taxes paid (or not) around the world. 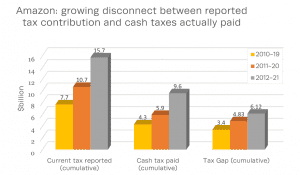 Amazon’s tax gap has grown to $6.12 billion over the decade

The Fair Tax Foundation has previously provided a cumulative 10 year analysis of the global tax affairs of the Silicon Six, including Amazon. This analysis was first revealed in 2019 and uncovered a $100 billion global tax gap between current tax provisions and the cash taxes actually paid by Amazon, Facebook, Google/Alphabet, Netflix, Apple and Microsoft. The cash tax paid by Amazon amounted to just 11.3% of their profit over the decade, placing them at the top of the table for the worst tax conduct amongst the tech giants.

This initial analysis in 2019 was followed by a fresh look in 2021, and confirmed Amazon as once again holding the ‘top’ spot when compared to the other five companies.

The Fair Tax Foundation has now analysed Amazon’s tax conduct anew, over the decade 2012-2021, and it’s not pretty.

The cumulative tax gap between what Amazon reports that it pays in its Financial Statements, and what it actually hands over in cash, has grown to $6.12 billion.

There has been an increase in the cumulative cash taxes paid by Amazon over the last decade to $9.6 billion, but this is equivalent to just 9.8% of profits over that period. Considered within the context of the US headline rate of tax being 35% from 2010 to 2017, and subsequently 21% after that, it’s a matter of concern.

Amazon’s continued aggressive approach to tax can be seen in their tax contingencies, which reached $3.24 billion in 2021.

These reserves relate to disputes with tax authorities where there is less than a 50% chance of them winning, and exist despite $1.2 billion of settlements in 2020.

So, what can be done?

We are urging investors to press Amazon at the AGM to publish a breakdown of their income, profit and taxes across the world – as Fair Tax Mark certified businesses do.

This is a watershed moment for the ESG and SRI investor movement, or should be.

This website uses cookies to improve your experience. We'll assume you're ok with this, but you can opt-out if you wish.

You can find out more about which cookies we are using or switch them off in settings.

This website uses cookies so that we can provide you with the best user experience possible. Cookie information is stored in your browser and performs functions such as recognising you when you return to our website and helping our team to understand which sections of the website you find most interesting and useful.

Strictly Necessary Cookie should be enabled at all times so that we can save your preferences for cookie settings.

If you disable this cookie, we will not be able to save your preferences. This means that every time you visit this website you will need to enable or disable cookies again.