Tax Strategy reporting among the FTSE 50 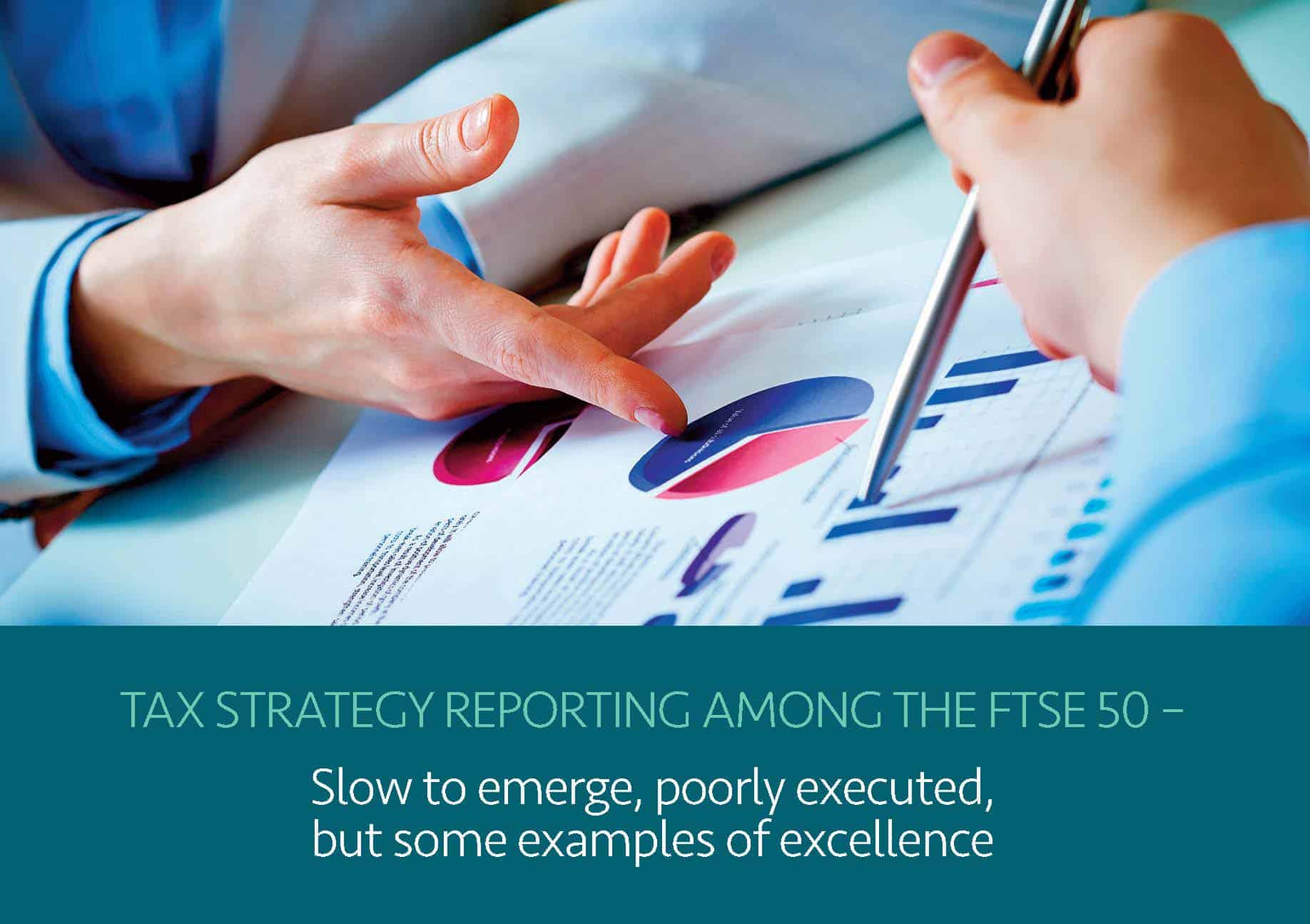 TAX STRATEGY REPORTING AMONG THE FTSE 50 – slow to emerge, poorly executed, but a few examples of excellence

New Government regulation requires that large business operating in the UK publish a UK Tax Strategy annually. However, an analysis of the UK’s fifty largest listed businesses by the Fair Tax Mark and the Local Authority Pension Fund Forum (LAPFF) has found that the majority of FTSE 50 companies have not followed Government and HMRC Guidance in a prompt and rigorous manner.

Only a third (34%, or 17) of FTSE 50 companies had published a Tax Strategy resembling that required by the new law online by 30th June 2017. Moreover, of those reporting, disclosure of the level of tax risk that the business is prepared to accept was frequently absent, as was clarity on tax planning motives. And nearly every business failed to comment on how they work with HMRC on interpreting the law.

The Fair Tax Mark Tax Strategy Report analyses how the top 50 companies of the FTSE 100 have responded, as at 30th June 2017. As well as rating basic legislative compliance, the analysis also assessed the degree to which companies provided clarity on other best practice indicators:

Encouragingly, a small group of companies are not only implementing the legislation promptly, but voluntarily providing much needed additional disclosures. Legal & General Group Plc, Prudential Plc, SSE Plc and Vodafone Group Plc are, in our opinion, very much leading the way on tax transparency.

Meg Hillier MP, Chair of the Public Accounts Committee, said: “Transparency in corporate tax is vital if the public are to have faith that the tax system is being supported by large corporations as well as ordinary working taxpayers. It’s incredibly disappointing that only 17 of the FTSE top 50 had sought to comply promptly with Government guidance. The corporate world needs to wake up to the fact that the public is fed up with the lack of openness over tax arrangements and endeavour to publish fully as soon as possible.”

Paul Monaghan, Chief Executive of the Fair Tax Mark said: “Progress to date is disappointing. There is an apparent reluctance amongst the UK’s largest companies to embrace the spirit of the tax transparency legislation and to respond quickly to the opportunity to provide much needed clarity in an area of significant concern to a variety of stakeholders. Thankfully a small number of companies are bucking the trend and have not only implemented the Government’s tax transparency regulations promptly, but have voluntarily gone further and are disclosing vital information on their approach to tax havens and the country-by-country reporting of their results.”

Councillor Kieran Quinn, Chair of the Local Authority Pension Fund Forum (LAPFF) said: “We would encourage the UK’s largest listed businesses to improve their tax transparency and lead the way for others. Explaining if and why a business will conduct activity in tax havens is now a basic requirement to build trust and credibility. Likewise, a shift toward public country-by-country reporting of profits and economic activity is needed if a business is to effectively communicate how and where it creates economic value.”

Schedule 19 of Finance Act 2016 introduced the requirement for designated large businesses to publish a Tax Strategy in relation to UK taxation – before the end of their first financial year commencing after 15th September 2016. The legislation applies to UK companies, partnerships, groups and sub-groups if in the previous tax year:

The Tax Strategies of the FTSE 50 were rated on a five-point scale as follows:

A copy of the Report is available here: Tax Strategy Reporting among FTSE 50 FINAL

Get the Fair Tax Mark newsletter


If you sign up to the Fair Tax Mark newsletter, your data will be stored in our secure database for up to six years. It will not be shared with any third parties. You can read our full privacy policy here.

Any cookies that may not be particularly necessary for the website to function and is used specifically to collect user personal data via analytics, ads, other embedded contents are termed as non-necessary cookies. It is mandatory to procure user consent prior to running these cookies on your website.